In September 1831, W.W. Phelps was charged by a church conference in Ohio to establish a press in Jackson County, MO. Acquiring a press and type in Cincinnati, Phelps wasready to print a monthly newspaper by January 1832. He was, however, unable to print a newspaper until Martin Harris arrived with paper for the press. He printed the first regular issue of The Evening and the Morning Star in June 1832, and included the “Articles and Covenants of the Church of Christ,” which is Section 20 in our scriptures today, among other items of news. Despite Phelps’ pledge to avoid controversy and politics in the pages of the Star, in July 1833 he greatly offended local Missourians by commenting on slavery and mentioning abolition. Already irritated by the rising political power of the recently-arrived Saints, the citizens of Jackson County destroyed his home, where he printed the newspaper, and tossed the printing press and type out of the second floor window.

This is a single issue of the Star printed in June 1833. It includes The Articles and Covenants of the Church of Christ, which was reprinted from the June 1832 number. Many Latter-day Saints would first encounter Joseph Smith’s revelations in the pages of the Star, and it was an important conduit of information for Church members until its destruction—so much so that Oliver Cowdery quickly set up a new press in Kirtland, printing the first Kirtland number in December 1833. 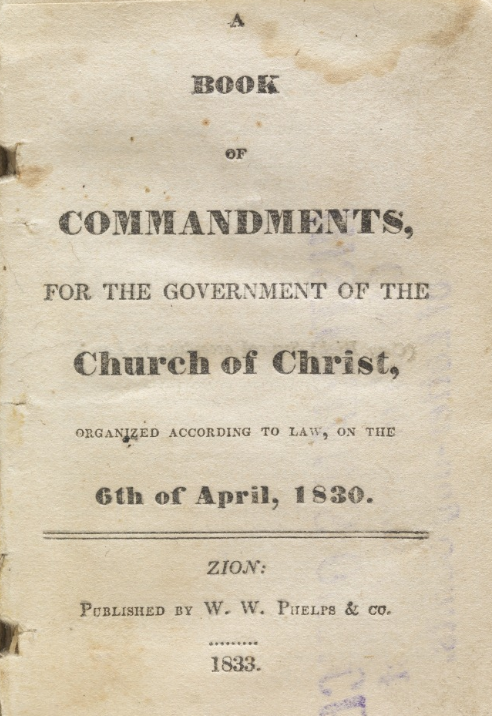 A Book of Commandments for the Government of the Church of Christ, 1833.

At a Church conference at Hiram, Ohio, in November 1831, the Church voted to print 10,000 copies of Joseph Smith’s revelations, which had previously been distributed by hand-copying. The “Literary Firm,” a small group of men including Joseph Smith, Martin Harris, Oliver Cowdery, John Whitmer, Sidney Rigdon, and W. W. Phelps were called by revelation “to be stewards over the commandments.” Believing in the importance of being able to share their perspective and faith with others, the Church established a printing press in Independence, Missouri, under the direct responsibility of W. W. Phelps, who did much of the work needed to print the revelations. By December 1832, printing was underway, but the expenses of printing and Phelps’ many responsibilities precluded finishing the book before June 1833, when all work on the book was interrupted by a mob incensed by an article Phelps had previously printed in The Evening and the Morning Star on the topic of slavery, as well as by the Saints’ sometimes over-exuberance to share their faith. The printing press was thrown out of a second-story window, along with finished sheets of A Book of Commandments. Fortunately, some copies of the sheets were were rescued from the streets of Independence by Latter-day Saints. Today, there are 29 known surviving copies of this book, and each is a miracle.

Unfortunately, since the printing of the Book of Commandments was interrupted before completion, Section 100 is not found in any surviving copies of the book.

Clicking on the image to the left will take you to the Joseph Smith Papers website, which has a digitized copy of A Book of Commandments for you to peruse. This copy, located at the Church History Library in Salt Lake City, Utah, is especially significant as it belonged to Wilford Woodruff,the fourth president of the Church. He added several additional pages to the book which contain numerous handwritten hymns sung by the early Saints as well as various other notes. 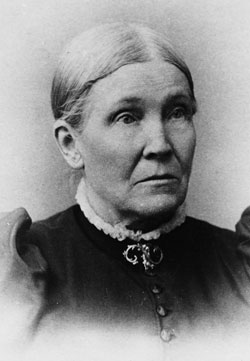 Mary Elizabeth Rollins Lightner (1818-1913) and the Book of Commandments

Mary Elizabeth Rollins and her sister Caroline are mostly known for their role in saving some of the signatures of the Book of Commandments in the summer of 1832 in Independence, Missouri. Today this story is well-known throughout the Church of Jesus Christ of Latter-day Saints, but that was not always the case.

In February 1904, at nearly 86 years of age, Mary Elizabeth Rollins Lightner shared her story in the Deseret Evening News, primarily in response to a “Brother Taylor” who wrote in an earlier issue that he was the only person who was involved in saving some of the Book of Commandments. Although it is seventy years afterwards, this may be one of the earliest versions of this now well-known story from Church history. 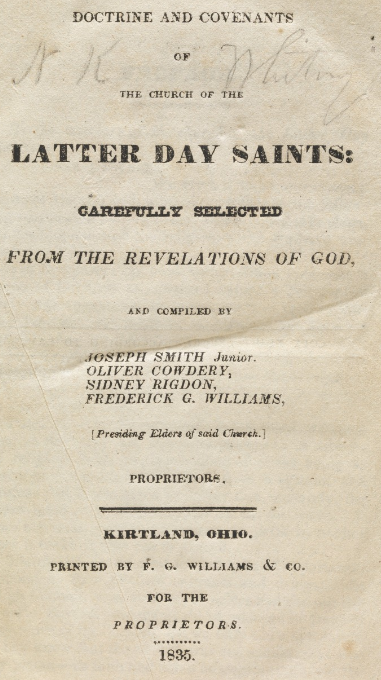 Doctrine and covenants of the Church of the Latter Day Saints. Carefully selected from the revelations of God, and compiled by Joseph Smith Junior… (Kirtland, Ohio: Printed by F. G. Williams and Co. for the proprietors, 1835).

Fifteen months after the press in Independence was destroyed, where the Book of Commandments was being printed, on September 24, 1834, the Kirtland high council appointed Joseph Smith, Oliver Cowdery, Sidney Rigdon, and Frederick G. Williams to publish another book that would include the doctrine and revelations of the Church. This book would be called “Doctrine and Covenants,” and copies of the completed book began to be sold in September 1835.

The new title is based on the two parts that made up the book: (1) seven lectures “on the doctrine of the Church of Latter-day Saints,” also known as the Lectures on Faith; and (2) the “covenants and commandments of the Lord,” which contained revelations pertaining to the regulation of the Church. The Lectures on Faith were part of the Doctrine and Covenants until 1921.

Showing here is Section 94 (now Section 100) of the Doctrine and Covenants. The revelation is nearly identical to how it was penned by Sidney Rigdon in 1833, with a few minor changes, primarily punctuation, as well as the last names of Orson Hyde and John Gould, being added to the printed text.

From Manuscript to Print and Beyond